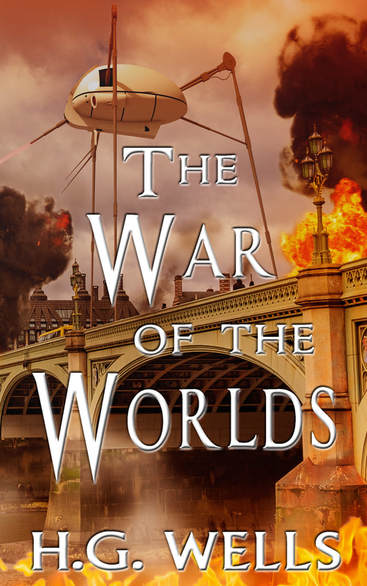 THE WAR OF THE WORLDS
​by H. G. Wells

In the nineteenth century most of the scientific world and the following public took for granted Mars had intelligent life. Concurrently, the topic of Colonial Imperialism and oppression of indigenous people fell under the critical eye of educated society. The extermination or near extermination of Native Americans, Tasmanian Aborigines, and hosts of other groups worldwide by more technologically advanced civilizations served Wells as the template for The War of the Worlds. He carried the scenario a step further by launching Martians, who most agreed were out there, against the reigning superpower that was the British Empire. Soon, the world was on its knees, with armies defeated. Civilization girded for the last remaining option, a desperate guerrilla war waged from bases in city sewer and subway systems when help came from an unexpected source, help that for originality stands above all others for its cleverness to this day.

The book affected much of the world’s collective conscience. Over the decades, this awareness extended to oppressions of all types and degrees of sensitivity. What began as a rail against genocide splintered to contemporary issues over the evils of racism, discrimination in public accommodation, establishment of Native American sovereignty, and most recently concerns over safe spaces. The reader must decide where Wells’ opinions would have fit in the spectrum.

In this ‘scientific romance’ Wells introduced a new world. Items and ideas common and familiar today crash landed on the late Victorian world like battleship falling from the sky. There was first contact, and interplanetary conflict. How many books and films subsequently used a variation of the heat ray? The poison gas echoes, sadly, down to today.

Less recognized, I think, was the long-term effect of the Martian battle plan on military tactics: A massing of overwhelming firepower carried by fighting machines, capable of express train speed, overwhelms or bypasses static defensive positions. Once in the open, they fall upon exposed mobs of refugees creating chaos that stymies military efforts to reinforce and relieve. Sound familiar? One hint—Blitzkrieg.

In the years after World War One, while standard military thinking kept one foot stuck in the mud of static defense and trench warfare, a few farsighted military leaders around the world evolved another tactic. With the advancement of tank and aircraft in firepower and speed, they found their ‘fighting machine’. The best known of these adaptations was the German Blitzkrieg carried out in World War Two, first by the Nazis under the name most commonly used, and later, by allies especially on the European Western and Eastern fronts. Wells didn’t formally name the Martian’s plan, but a comparison with the methods employed by fast moving mechanized columns and supporting air cover leaves little chance of independent development. During the twenties and thirties, I picture lightbulbs flashing in the brains of young officers like Guderian, Patton, and Zhukov when they read The War of the Worlds.
​
These are some of the thought provoking aspects of the book. I worked through them in my first fifteen readings. Now I approach this classic simply because it’s a gripping story, revisited for its elegant and timeless style, as alive today as it was at the end of the nineteenth century, and it bears repeating, possessing an ending no alien invasion tale has matched yet.