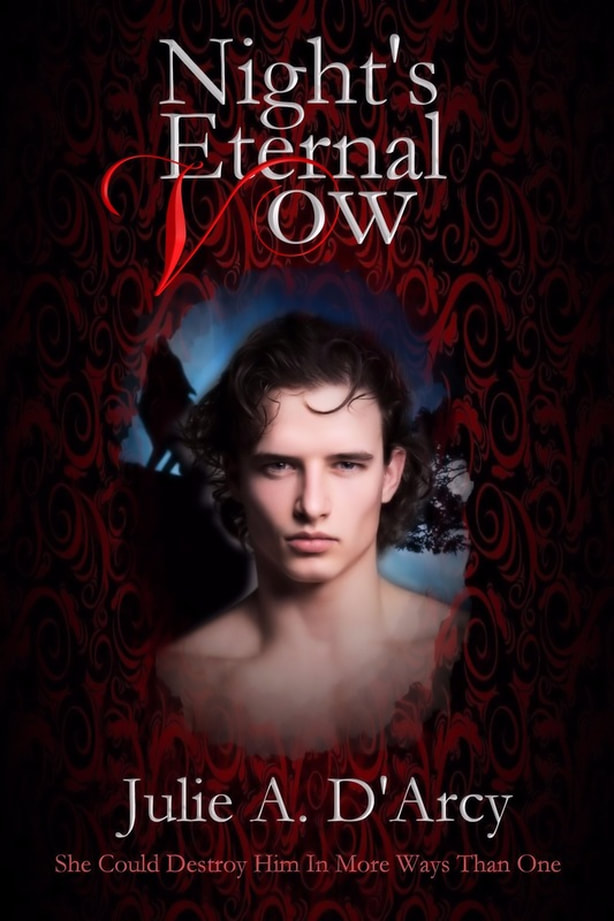 Lord Vincent D’Armano, a young nobleman, on leaving his mistress’s house in London one rainy cold night in the 1700’s is set upon by a sensual, vampiress, Epatha, who is in search of a mate.

Many years later, after travelling to America and killing a war chief’s son, Vincent is cursed by a Cheyenne Shaman and has the ability to feel emotion restored. He escapes Epatha’s deadly embrace, although she still tracks him, and re-emerges into society decades later only to meet with the very woman that could destroy him, in more ways than one.
Detective Elara Gale hates Vampires after her childhood boyfriend is murdered and she sees a black cloaked figure fleeing the scene.
So when she discovers the dark stranger she is already more than half in love with is no other than the Vampire she is hunting, her loyalties are torn between her desire for Vincent’s touch and her duty to the law.

Lust, Romance, Magic and Murder combine to make Night’s Eternal Vow fast-paced, mission-oriented and filled with life and death issues. Vincent and Alara after battling Epatha in the present are cast back in time by an unusual hypnotist and an arrest gone wrong, and faced with a struggle to stop the Vampiress from making Vincent a vampire, and to save his mortal soul.
​
NOTE: This is a previously published work. The title, author, and/or publisher may have changed.


​
© 2014-2020. All rights reserved and no exceptions. All personal works on this site are the exclusive property of I Heart Book Publishing, LLC. Work may not be transmitted via the internet, nor reproduced in any other way, without prior written consent.