A Graphic Anthology by Mark Wheatley ran a contest to write a story based on his art. Cynthia and Mike Arsuaga had an entry--Boundary Dispute and was available for FREE Halloween. Check back for the links to the entire graphic ebook when Mark offers again. 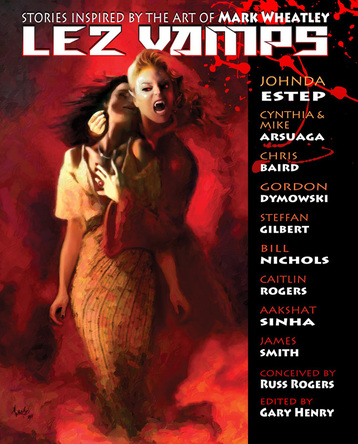 
I waited in the dark for my prey hidden by the cover of the forest.

Humans always passed this way, mostly young males, impatient to partake of the sweet offerings in the bayou honky-tonk on the main road leading into town. The lush canopy of live oak and devil vine filtered the light to nothing and made the unsuspecting revelers easy targets for the bloodlust of a vampire with dead-on night vision. Seduction, sex and ultimately their life’s elixir made for a night of pleasure, mine as well as theirs.

Casting a silvery aura, a full moon lit the path and silent meadow surrounding the trees. Enough of a pallid glow washed the scene to make out any figures crossing through the hunting ground. I stared into the distance. Time means naught to a vampire on the hunt. The heat of expectation sent tingles travelling over my skin to every extremity.

A ripple in the overall pattern of stillness caught my attention. The subtle sound of soft foot upon saturated loam and fallen leaves could only be heard by a preternatural creature with heightened senses. Every passing minute, stirred the charge of expectation in the air and an insane itch to bite. A form emerged into the open. Not many females hazarded this path. As an equal opportunity predator, I decided another of my gender would do.

The target walked fast, bent against the chilly breeze. She moved, with long, deliberate strides, a willowy woman with dark hair flowing behind like an ebony pennon. Absolutely black in moonlight, her locks sucked up all the light. She wore a body-hugging dress, accentuating every curve of a lithe young frame. The wind molded the flimsy fabric to her flesh, clearly no protection from the chill. The cold didn’t faze me, but a human would find the evening weather intolerable without some type of protection.

I watched with curiosity. Her shadowy figure moved sensuously as her hands twirled the silky mane cascading over her covered shoulders. Only a few yards away and still in the open, I noted brief detail of the face, young and smooth. A delicate form, one of such innocent beauty I’d not seen in this territory for years. My heart skipped a beat and I sucked in a deep breath. She seemed familiar. For a moment, a memory pushed to the surface. I brushed it aside in anticipation of the impending attack.

I returned attention to the face of the woman drawing nearer. The fractured silver moonlight made the oval visage, pale and bloodless with a touch of color on the cheeks. Large, alert, and wary eyes traversed the path ahead. The vague and indistinct features brought to mind the worn image on an old well used coin, but I observed enough to discern she was superior prey.

“I’m going to enjoy this one,” I murmured as she reached the edge of the clearing. Five more seconds and she’d enter the wood. Moments drifted by as I allowed her to glide closer. Reeking with eagerness, I curled a flaxen tress.

I had a vivid fantasy of how the attack would happen. She’d pass and I’d cut off retreat to sweep in from behind. I can reach forty miles an hour at top speed, beyond any human’s hope of escaping, especially a female. She wouldn’t hear my approach until the last second to turn in horror as I fall upon her and take her to the ground.

The iron-tainted scent of blood permeates the air. I stare into the woman’s angelic face. She captures my gaze and silently begs for mercy. I reach out and finger a lock of her long black hair, then caress the side of her oval face. She is innocence personified, with a firm athletic body. Although she will put up a good fight, she has no more chance of escaping than a rabbit has of escaping a bobcat’s jaws. All this would only serve to heighten my frenzy of bloodlust.

In my fantasy, a sharp, startled breath escapes red lacquered lips when she realizes every nightmare and dark fairy tale of childhood is true.

The walking dream continues as I force her head to one side exposing the long white neck. The face is in shadow now, all horrified profile and hysterical gleaming eye. I brush aside some raven curls and bite deeply. Rich salty blood gushes hotly down my throat. The struggles gradually subside. I withdraw my fangs from her flesh and as she begins to slip away, I apply amorous ministrations designed to evoke episodes of the smaller death leading inevitably to the ultimate one. Gradually, a satiated blush paints her face.

Before dying she silently mouths the word ‘Why,’ in self-reproof, I think, for not believing The Stories of childhood whimsy.

Now the cooling corpse is lying on the ground limp as a rag doll. I sit back under a tree, relishing the warmth of the blood seeping throughout my body. With my appetite fulfilled, I dab a droplet of blood from a corner of my mouth.

The snap of a twig returns me to the present.

The prey is twenty yards ahead, well into the wood, time to go. Like an engulfing tsunami, her beauty overwhelms my senses. The lust for her blood becomes secondary to the hormones pulsing through my veins to every extremity. A wave of dizziness forces my eyes shut. The area below my belly clenches and sends out arcs of electricity to the center of my core. I shift position upon the grass beneath my feet, and I’m acutely aware of the scent of my sex, a pleasant, musky aroma followed by the inevitable dampness between my legs. I shake my head to clear the erotic images and to regain control. I fail. My mouth waters in expectation of kissing her lush lips and tasting her sweet blood. In a burst of speed, I am on her. She falls forward, with me on top. One of her hands is still free and she slaps my face hard. I rear back from the powerful, smarting blow which allows her time to spring to her feet.

“What the hell do you think you’re doing?” She shouts with indignation as the black wig comes off. “This is my hunting ground.”

With a second to regain my composure, I realize the titillating woman who made my blood burn was Deidra from the coven. I’d met her once and had been intrigued when the Master presented her to the congregation three moons ago. She was a young thing, a fledgling at best and newly indoctrinated into the blood family. Now, the fire and power in her voice and body made my skin tingle. I’d had men less alluring and masterful than the woman standing before me. I had to have her.

“I could say the same to you, sweet one,” I said in a low, sultry tone. I took a step forward, my intentions clearly projected by my body language. I twisted my hands into Deidra’s hair, and blew out a soft breath. “How about I ravish you?” My voice rasped with the offer. The thinnest trace of a smile played around her lips. As I crushed my mouth down on hers, she gasped and wrapped her arms around my neck, pulling me closer.

With urgency, we prepared to share a vampire kiss. Two pairs of white fangs curved around opposing, mutually ravenous lips in preparation for our exchange of blood and pleasure. A wall of my own hair blocked the way. I flung the golden mass over a shoulder and wrapped vampire strengthened arms around the delicate width of her shoulders, drawing her close. Cupping her warm breast in a long fingered hand, I devoured the honeysuckle scent of her womanly flesh saturating the air around us.

I expected the embrace to be a slow, seductive and enticing–almost tentative–meeting of lips and bodies. Instead, her response became an onslaught. She attacked from everywhere—lips, mouth, hands, avid press of supple body parts. No prey, no consort, –male or female, rivaled the experience.

I leaned forward to press the length of her body hard against mine. Any closer, and I’d have squeezed her breathless. My gaze locked onto her golden amber eyes. She was my angel of lust and need.

Here in this secluded spot, I found myself reduced to the same kind of uncontrollable, inevitable, voracious hunger that motivated all vampires in search of quenching their blood and lust. Deidra moaned. The sound vibrated from the back of her throat. She relaxed with a soft acquiescence to my embrace. I laughed softly knowing I would never get enough of this temptress’ unique scent or taste, like honeysuckle wine, sweet innocence with a hint of the exotic.

“What are you going to do now?” Deidra asked.

I grinned. I thought I was in heaven as the night mist surrounded us in an opaque, dewy veil.


© 2014-2021. All rights reserved and no exceptions. All personal works on this site are the exclusive property of I Heart Book Publishing, LLC. Work may not be transmitted via the internet, nor reproduced in any other way, without prior written consent.